Could Forward Washington be the infrastructure plan we’ve been looking for? 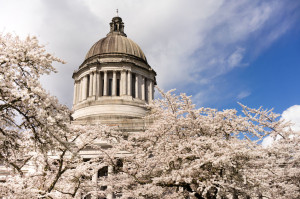 We’ve heard some interesting things in this ongoing Washington state legislative session, but one proposal that’s really caught our eye is the Forward Washington plan.

You’ve probably heard of it by now as we approach the home stretch of session, which has a final legal day of April 29. But if you haven’t, it’s a possible $17 billion plan to overhaul infrastructure systems across the state, a topic we at AGCW are very fond of promoting. This work would include more than 80 projects spanning a decade and would also address green technology investments.

Lawmakers are still working out the specifics of the funding and its disbursement, and that $15B price tag is likely to shift by the time all is said and done. It’s not clear if the funding package could pass into law. Sen. Steve Hobbs (D-Lake Stevens) introduced the legislation and describes it as a “work in progress.” But members of the Senate Transportation Committee, of which Hobbs is chair, approved the bill in early March after a public hearing, giving supporters a hopeful sign of its viability.

Those supporters include AGC Chief Lobbyist Jerry Vanderwood, who testified in favor of the bill package.

“The infrastructure and environmental challenges we face should be treated as an opportunity, not a barrier,” Hobbs said. “These investments will create tens of thousands of jobs, modernize Washington’s transportation systems, and address some truly urgent environmental needs.”

We couldn’t agree more. Possibly the one catch to this promising legislation is in its funding — many of the environmental investments would be paid for by a new carbon fee, which Hobbs defends as being a different model than the two failed carbon taxes of the past few years. For what it’s worth, Hobbs says he didn’t support either of those earlier measures.

Money questions will no doubt play a big role in the fate of this bill. The projects themselves are solid and include such items as the replacement of the I-5 Vancouver bridge; a rebuild of the US 2 trestle in Snohomish County; and various packages to support people with special needs, rural mobility, and public transit. We’ve linked on our website to the full list of projects for you to browse when you have a chance.

Infrastructure deserves our public investment. Please feel free to contact your representatives to let them know how you feel about this vital issue.