How well do you receive feedback? 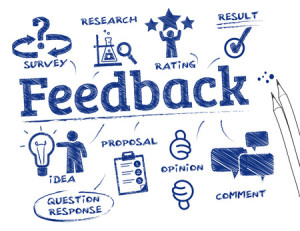 Feedback — in all of its forms — is critical to helping people identify their strengths and weaknesses. Delivered correctly, it can help foster professional growth.

But most people don’t like getting feedback if it’s a mix of positive and negative. It’s human nature: Most people focus only on the positive aspects of their personalities and behavior and tend to ignore or gloss over the negative. Criticism is hard to hear. Research also shows that many of us also tend to be more critical of the behavior of others than of our own behavior. Researchers at Harvard Business School and the University of North Carolina at Chapel Hill found that in addition, we don’t always react well when people tend to disrupt our view of ourselves.

Paul Green of Harvard Business School and Brad Staats of the University of North Carolina at Chapel Hill found that many people in the business world not only avoid but disconnect from people who provide them with critical feedback, even if it’s quality input that can help them succeed. Likewise, they tend to strengthen their bonds with people who see mainly or only their positive qualities.

Researchers Sheila Heen and Douglas Stone, who have studied this issue, have found that feedback strikes at the ‘tension’ between two core human needs — the need to learn and grow, and the need to be accepted just the way you are. As a result, sometimes even a seemingly benign suggestion can leave someone feeling angry, anxious, badly treated, or profoundly threatened.

As you can imagine, that’s not a good thing. Honest and quality feedback is vital to your success in the workplace. The good news? Research shows us that we can overcome feelings of fear, insecurity and doubt to embrace the type of feedback that can help us reach higher levels of excellence. Here are some ways to do that:

Develop and nurture relationships with those who are willing to provide you with tough feedback. Let trusted friends and work associates know you want quality feedback relating to your leadership skills — the good and the bad. Many of us don’t accept criticism well and it shows, making those closest to you reluctant to provide it.

Ask for clarification. If a colleague tells you that you’re too abrupt, for example, ask them for more information. If you don’t, it’s easy to blow the criticism out of proportion (everyone on my team thinks I’m a jerk) when maybe the message was only that you’re too short with your colleague who is highly sensitive.

Don’t wait for feedback. Research shows that feedback is accepted the most — and does the most good — when you ask for it instead of receiving unsolicited feedback. So make sure you’re regularly asking for feedback from those who are most likely to provide you with quality input.